Background: The Port of Everett needed to build a new rail/barge transfer facility (hereafter the ‘Mount Baker Terminal’) contracted Pentec Environmental to carry out a biological evaluation. Pentec found that the construction of Mount Baker Terminal would require a series of actions to offset the minor, yet unavoidable losses to nearshore and riparian habitat function [1]. A Conservation Measures and Monitoring Plan (CMMP) was developed by the Port to track impacts and associated mitigation measures.

To offset the impacts to eelgrass, the CMMP determined that approximately 100 m2 (1100 ft2 ) of eelgrass habitat would need to be added to compensate for permanent (Mount Baker Terminal) and temporary (moored barges) shading impacts to the eelgrass bed. The CMMP established a 20-year monitoring program to assess the efficacy of mitigation, including pre (2003 and 2004) and postconstruction (2006 – onward) surveys.

Preconstruction eelgrass surveys were incorporated in planning the location of Mount Baker Terminal, as allowed. In April 2004, a pilot transplanting study was conducted in various locations to determine which sites had the highest likelihood of success. In 2005, viable sites were expanded to meet the area required by the CMMP (~100 m2), and supplemental transplants were added as needed in 2006 and 2007. Shoots and associated rhizomes were bundled, tied with twine, and anchored using 6” staples. The number of shoots bundled depended on the year and depth (intertidal vs. subtidal) of transplanting–all plantings from 2004-2006 used 3 shoot bundles and in 2007, subtidal transplants used both 3 and 10 shoot bundles and intertidal transplants 3 and 5 shoot bundles. A subset of the transplanted sites also included sod transplanting–this method removes ~0.09m2 (1 ft2 ) of seagrass and underlying sediment from the donor bed, which in this project was also the reference site, and transplants it into an excavated plot to ensure the transplanted sod is level with the surrounding habitat. Adjusting the number of shoots per bundle had no detectable effect on restoration outcomes nor was there a reported difference in the efficacy of anchored bare-root transplants versus sod transplants.

Success was measured as “no temporal loss of eelgrass productivity…area of eelgrass beds created, and the calculated number of eelgrass shoots in the transplant areas must equal or exceed any declines in the project vicinity, adjusted for changes in the reference bed.” [1] and if the criterion was not met, transplants would have to meet a 1.5:1 mitigation ratio.

Outcomes: Pre-construction surveys showed natural eelgrass meadows declining in area— from 2005 to 2008, 563m2 was lost. Meanwhile, shoot densities (per m2) increased—from approximately 30 shoots per m2 (2005) to 48 shoots per m2 (2008). Transplant success (2005-2008) varied across space and time. Supplemental plantings were often needed throughout this three-year period to counter losses and a handful of the sites established in 2005 were later abandoned.

Reports indicated that 20 years of monitoring would be conducted, we were only able to access reports from 2008 and 2009—2 and 3 years post-construction. We suspect more current reports could be made available upon request. 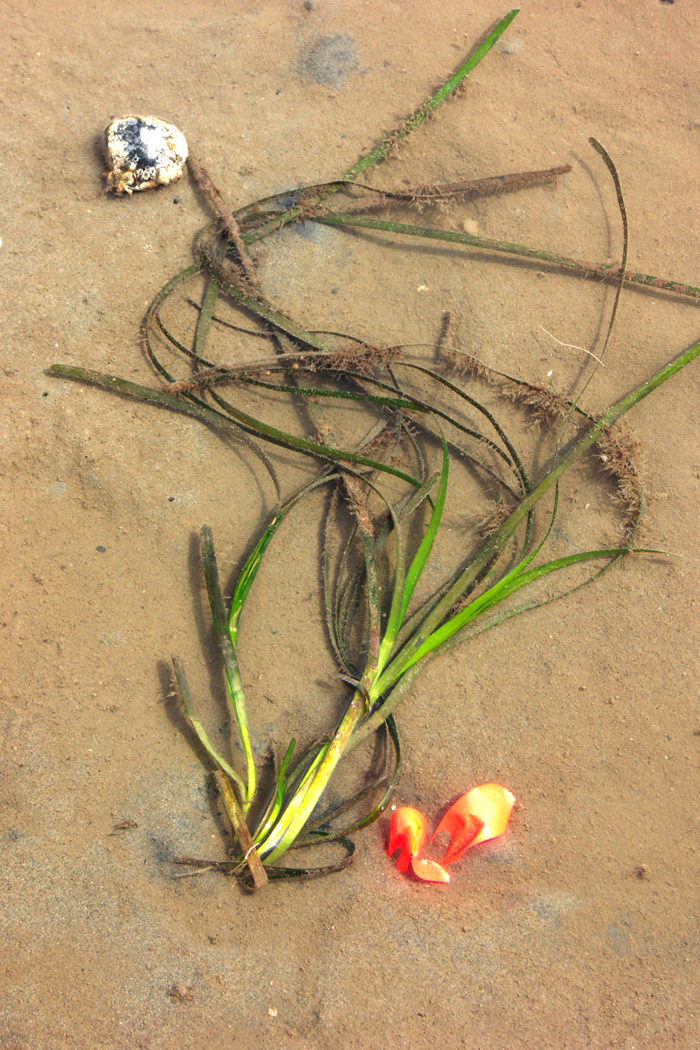 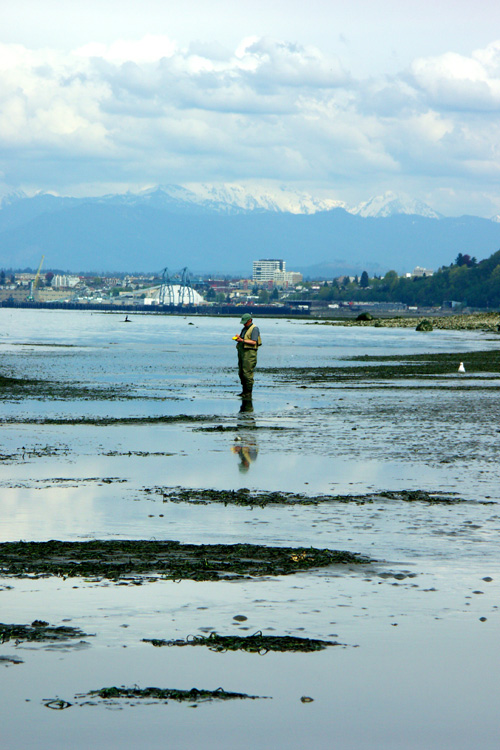 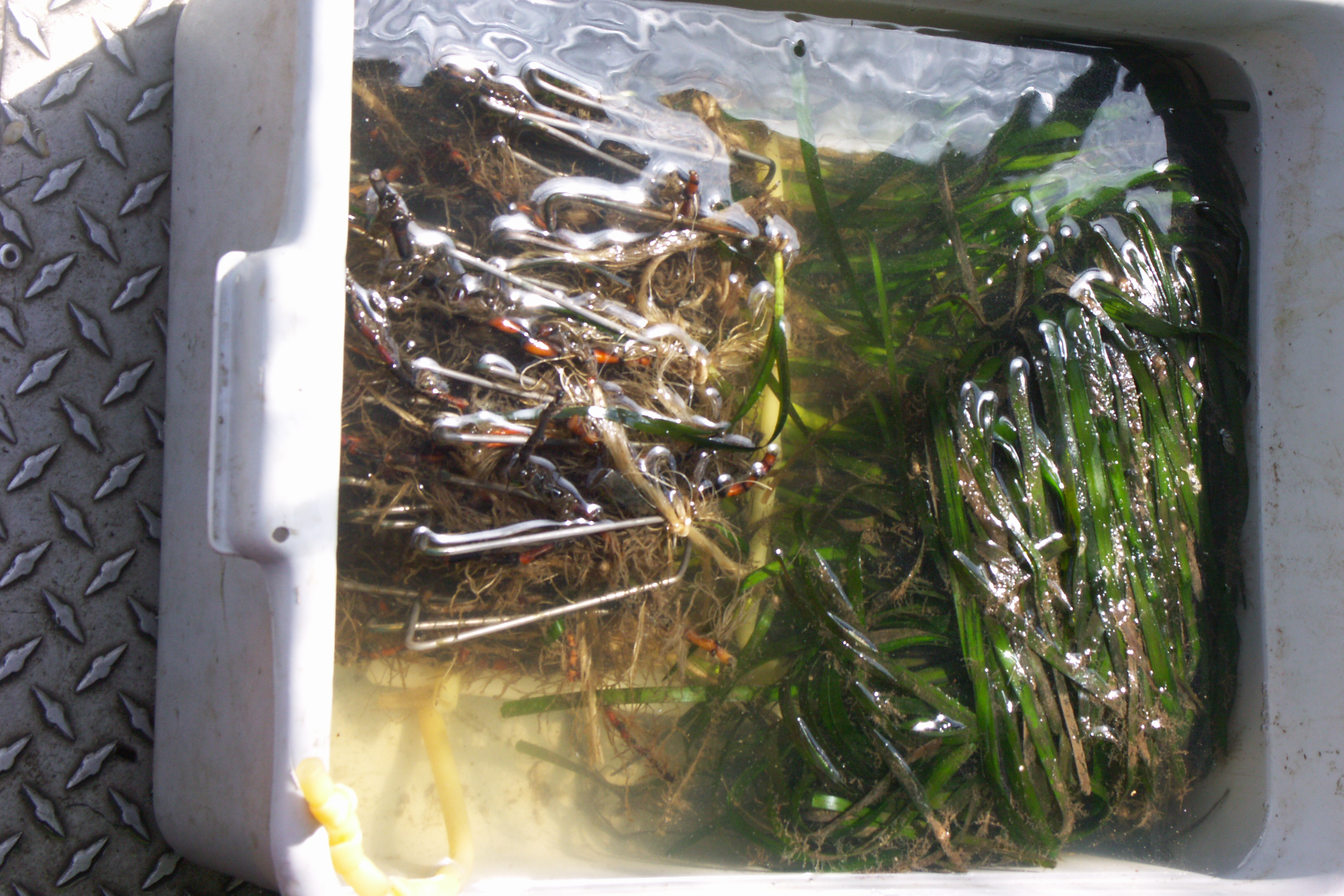 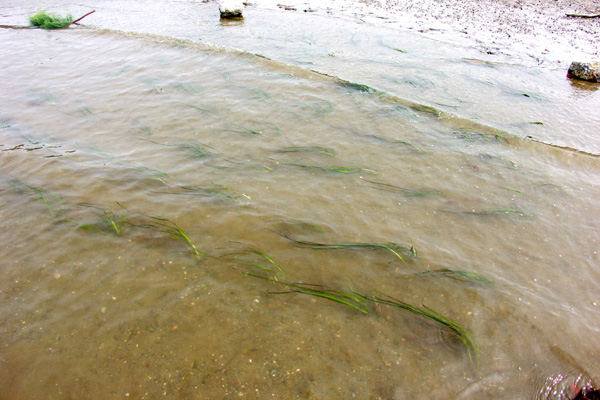 Transplanted in the intertidal, organized in rows. Photo: Jason Stutes.